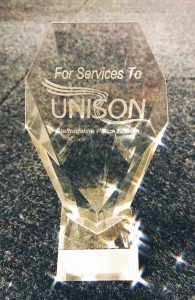 If you believe you know someone that falls into this criteria please complete a nomination form. This can be done at any time of the year and will be put forward with the nominations at the end of the each year.

ANY EMPLOYEE OF STAFFORDSHIRE POLICE can nominate an individual. If you do not know if the nominated person is a UNISON member please still forward them as the Branch Office will make a membership check on all nominations. Awards are made in retrospect. 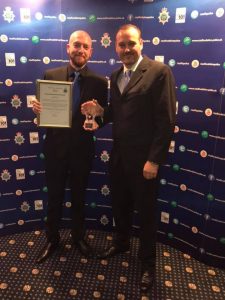 PCSO Simon Holmes has been working as the local PCSO for Shelton neighbourhood for a number of years and within this time, he has built strong community relationships which have allowed him to build an intelligence picture that has been invaluable to the policing teams working around him.

Simon, through his day-to-day performance, uses his local knowledge to identify offenders and effectively target problems. Simon has a clear drive to safeguard those most vulnerable and work with partners to achieve the best outcomes. Simon often uses his initiative and in-depth knowledge of his local area to do this and has been congratulated by councillors, colleagues and partners alike for his commitment to problem solving and dealing with sensitive issues.

Through his work, Simon has shown the true value PCSOs have to the policing family and the community in which he works. He has taken a proactive approach to reducing fear of crime and disorder and is a true asset to Staffordshire Police.

Skip back to main navigation

Timeline photosWe'll be hosting a Facebook Live with Chief Constable Chris Noble and senior officers on tomorrow at 6:30pm following the launch of our new local policing model👍 If you have any questions about the new model, please leave them below💭⬇️ ... See MoreSee Less

Our very own Alison Sims is with the welfare bus at HQs, if you have any questions please feel free to go along.We will be arranging to attend other work places around the County in the next few weeks🙂 ... See MoreSee Less

Challenging Racism in the Workplace

We just wanted to bring to your attention a New Guidance leaflet on ‘Challenging Racism in the Workplace’ based on the bigger guidance that has just been uploaded on the webpages below:- The bargaining guides webpage https://www.unison.org.uk/get-involved/in-your-workplace/key-documents-tools-activists/bargaining-guides/ and to the…
END_OF_DOCUMENT_TOKEN_TO_BE_REPLACED

Staffordshire Police Unison are running a number of question and answer sessions for Unison Members relating to the pay deal on offer to Police Staff.  These will be held at the following dates and locations together with a number of…
END_OF_DOCUMENT_TOKEN_TO_BE_REPLACED

Members, Times are getting very tough at the moment, please click on the link to see other ways that Unison can provide Financial Assistance, should you need it. https://www.unison.org.uk/get-help/services-support/there-for-you/financial-assistance/
END_OF_DOCUMENT_TOKEN_TO_BE_REPLACED

Members, due to a staffing shortage the packs will be delayed in coming out to you. The AGM booklets have been emailed out to every subscribing member.  If you have not received a copy please email branch12388@aol.com
END_OF_DOCUMENT_TOKEN_TO_BE_REPLACED

This web site is designed to help you to locate information and services available to you as a member, or potential member, of the Staffordshire Police Branch of Unison.